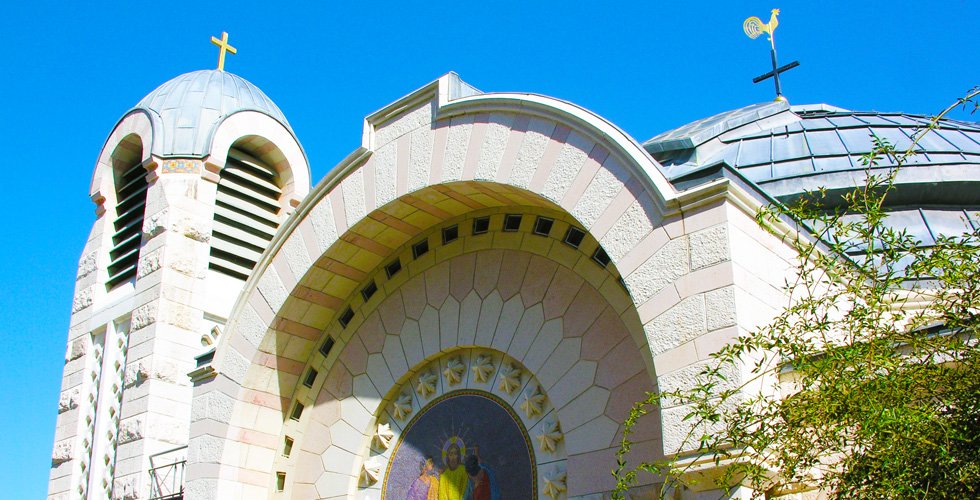 This important landmark for the Christian faith is believed to be the location of Caiaphas’ house, the setting for Peter’s denial of Jesus on the night of his trial.

The church was built in 457 AD and it was destroyed in 1010. The chapel was reconstructed by Crusaders in 1102 and given its current name. One of the most recognizable features of the church is its golden rooster, which sits atop a black cross as a symbol of Christ’s prophesy that Peter would deny him 3 times “before the cock crows”.

Matthew Chapter 26 – (Verse 57 – 75)
Then those who had seized Jesus led him to Caiaphas the high priest, where the scribes and the elders had gathered. 58 But Peter followed him at a distance, as far as the courtyard of the high priest, and going inside he sat with the guards to see the end. 59 Now the chief priests and the whole council sought false testimony against Jesus that they might put him to death, 60 but they found none, though many false witnesses came forward. At last two came forward 61 and said, “This fellow said, ‘I am able to destroy the temple of God, and to build it in three days.’” 62 And the high priest stood up and said, “Have you no answer to make? What is it that these men testify against you?” 63 But Jesus was silent. And the high priest said to him, “I adjure you by the living God, tell us if you are the Christ, the Son of God.” 64 Jesus said to him, “You have said so. But I tell you, hereafter you will see the Son of man seated at the right hand of Power, and coming on the clouds of heaven.” 65 Then the high priest tore his robes, and said, “He has uttered blasphemy. Why do we still need witnesses? You have now heard his blasphemy. 66 What is your judgment?” They answered, “He deserves death.” 67 Then they spat in his face, and struck him; and some slapped him, 68 saying, “Prophesy to us, you Christ! Who is it that struck you?”

69 Now Peter was sitting outside in the courtyard. And a maid came up to him, and said, “You also were with Jesus the Galilean.” 70 But he denied it before them all, saying, “I do not know what you mean.” 71 And when he went out to the porch, another maid saw him, and she said to the bystanders, “This man was with Jesus of Nazareth.” 72 And again he denied it with an oath, “I do not know the man.” 73 After a little while the bystanders came up and said to Peter, “Certainly you are also one of them, for your accent betrays you.” 74 Then he began to invoke a curse on himself and to swear, “I do not know the man.” And immediately the cock crowed. 75 And Peter remembered the saying of Jesus, “Before the cock crows, you will deny me three times.” And he went out and wept bitterly.

Here we includes sites and resources related to :