Learn more about our friendly tour guides and their experience

At America Israel Tours, our guides are our lifeblood. All of our tour guides are top government licensed guides with one mission in mind – making your tour the journey of a lifetime. Our guides will be with you throughout your journey and will connect the history, geography and theology of the places you will be visiting in a friendly and intimate atmosphere. We select our tour guides based on their dynamic personalities and expertise in everything from biblical scriptures to local culture, history and geography. No two America Israel Tours guides are alike. They do, however, share one thing in common: a great love of the land of Israel and all the other locations we cover. Our guides cannot wait to get to know you and make your experience everything you dreamed it would be – and more!

Expect to be guided by the most knowledgeable professionals in the travel industry. Our guides are experts not only in Israel's ancient history and biblical events, but also have all the inside information of the current events and findings.

Our tour guides are exceptionally friendly and accommodating. It is important to us that each traveler receives personal attention and care from our tour guides as well as from our local staff.

Your safety is our top priority and our tour guides play a major role in that. Our guides are consistently updated by the Israel authorities in case anything needs to be altered due to safety concerns. 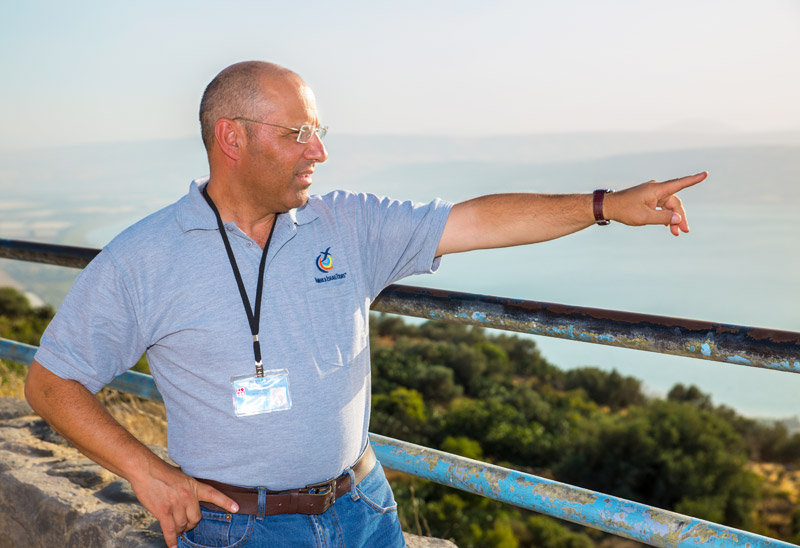 Yoram Black is a native Israeli. Yoram served as a Lieutenant Colonel in the Israeli Army and has a BA in International Relations and Political Science from the Hebrew University in Jerusalem. After finishing his studies at the Hebrew University, Yoram served the State of Israel in various positions abroad. After returning to Israel, Yoram decided to turn his love and passion of Israel and its people into a profession and became a licensed tour guide by the Israeli Ministry of Tourism. As a guide, Yoram is known for his ability to connect to all tourists and lead groups and individuals through the land of the Bible while serving as an educator at the same time. Yoram is married to his wife, Tamar, and is the father of three children. 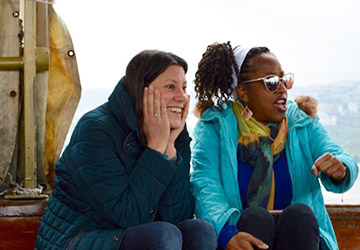 Lital Anavim was born and raised in Jerusalem, leaving now she in a Kibbutz in the Judean hills. She served at the field intelligence unit of the Israeli army until 2002. Graduated (BA) in communication and business management at the College Of Management Academic Studies. She received her license as a tour guide from the Hebrew University in Jerusalem. She also took a course in Second Temple Period and Christian Theology. Lital is an experienced tour guide of pilgrim groups, both Jewish and Christian, especially Protestants. What excites her most about guiding Pilgrim groups, is the shared journey of discovering the connection between the scriptures and the various sites, between dreams, faith and hopes of the visitor, and the breathtaking views of the land of Israel, where our forefathers dwelt, views that have not changed for thousands of years. 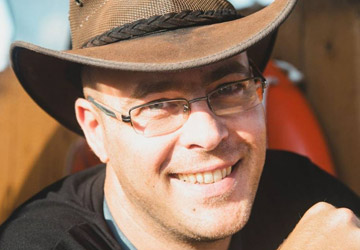 His passion for travelling began while he was wandering around the world. Mesmerized by the variety of food, cultures, colors that captured his attention everywhere he went. Once he was back in Israel, it struck him that although he could find his way through the jungles of China, he wasn't even close to really knowing his own country, Israel. While deliberating about his career, his wife suggested he should apply to be a tour guide and take a course which was due to open in Haifa. He didn't think twice about accepting the challenge that has since then completely transformed his life. In his tours, Barack does his best to create a fun experience while learning about the sites. He truly believes one should listen to and follow his heart if he strives for happiness in life! Barack is a certified tour guide since 2011, with vast experience with Christian pilgrimage groups, Biblical tours, youth groups and regional tours. 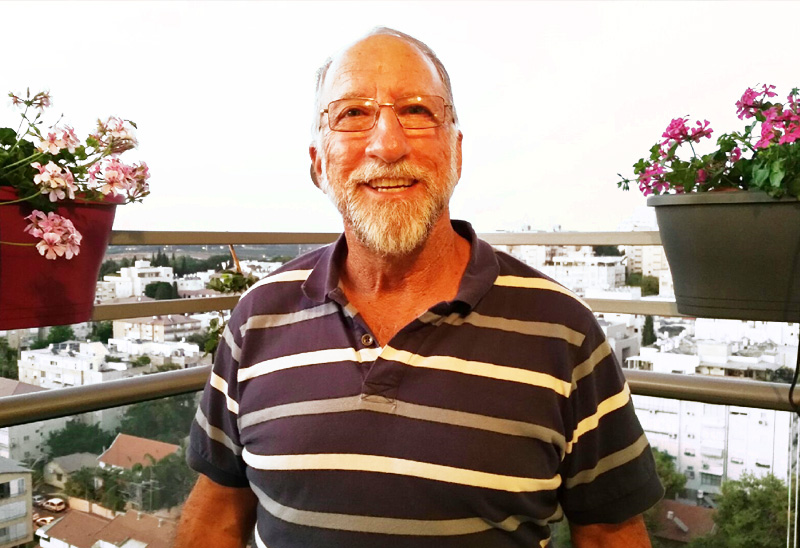 Bruce lived in the Boston, Massachusetts area and later graduated from Rutgers College with a degree in Political Science. He immigrated to Israel in 1972, where he has lived on a kibbutz (communal village), worked as a guide in the Sinai desert, maintained a private farm for 10 years, and finally became a professional guide in 1991. Bruce’s first impression of Israel was that it is a most unique and sometimes indescribable place to be. Bruce’s personal journey and growth as a professional guide have only reinforced those feelings. He always desires to try to show people Israel’s “uniqueness”, in order for them to have true and lasting impressions of Israel. Bruce resides in Rehovot, just south of Tel Aviv, is a father of 3, and grandfather of 5. “My favorite northern site is the observation point on Mount Arbel which allows one to view the entire north of Israel and is an incredible place for prayer. My southern favorite site is Masada with its striking desert atmosphere and historical message for all”. 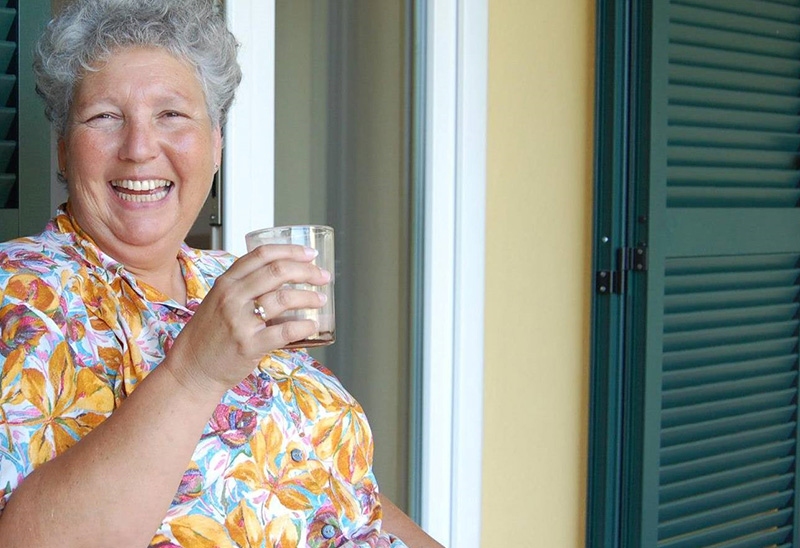 Tamar is a native Israeli and has been guiding groups in Israel since 1987. She has guided a variety of tourist groups throughout Israel including Christian Tours for both Protestants and Catholics, in-depth educational tours with cultural connections, as well as Christian-Jewish journeys. Throughout the years, Tamar has guided people from all over the world, but her specialty is with tour groups from the Philippines and the U.S.A. Tamar served in the IDF military service as an aerial photographer and received degrees in Latino-American studies and the History of Theater at the Hebrew University. She currently resides in Jerusalem and has four children and one grandchild. Tamar’s favorite sight is Masada because it is a symbol of Jewish bravery and heroism which is surpassed by no other in Israel. 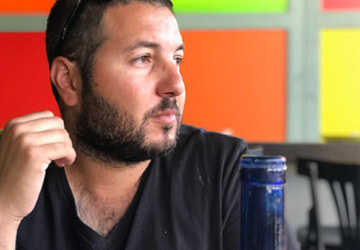 Yeshay was born and raised in Moshav Avigdor, in the Judaean foothills. His father used to work as a tour guide as a part-time job and Yeshay accompanied him from a very early age. While in high school he volunteered at SPNI (Society for the Protection of Nature in Israel) and received the Education Ministry’s tour guiding permit where he gained skills in orienteering, survival and deeper knowledge about Israel’s geography. He served in the IDF Elite Forces unit from 2001-2004 and received a Merit Award for his acts. After a year of backpacking it was only natural for Yeshay to follow the footstep of his father and to become a tour guide. Yeshay completed his tour guide training course by Israel’s “Ministry of Tourism” in 2007 and he has guided groups in Israel from all over the world as a licensed guide ever since. He holds an additional certification in rappelling, rock climbing and outdoor training from the Wingate Institute, Israel’s premier sports authority and training center. 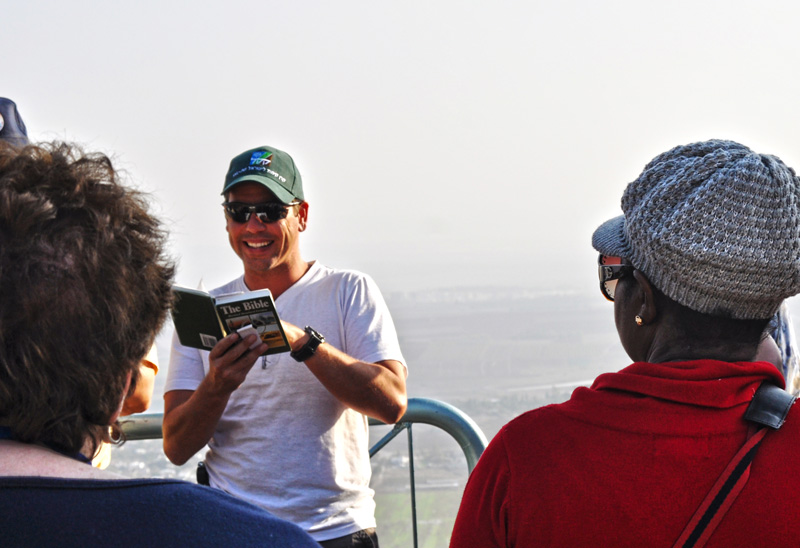 Yair is a native Israeli and was born and raised in Tel Aviv. He finished his army service in 2001 with the rank of a Major. After the army, Yair traveled for a year but came back to Israel with the aspiration of turning the love of his country into a career. In 2003 he enrolled in a tour guide’s course and graduated successfully in the following year. He has since been guiding and leading groups all over Israel. Yair decided to broaden his knowledge and received a bachelor’s degree in History and Archaeology at the Tel Aviv University in 2009. He has worked with many different groups of various orientations, from Archaeological oriented tours to religious oriented tours. Yair specializes in Judaism, Christianity, Archaeology, History and Contemporary issues. 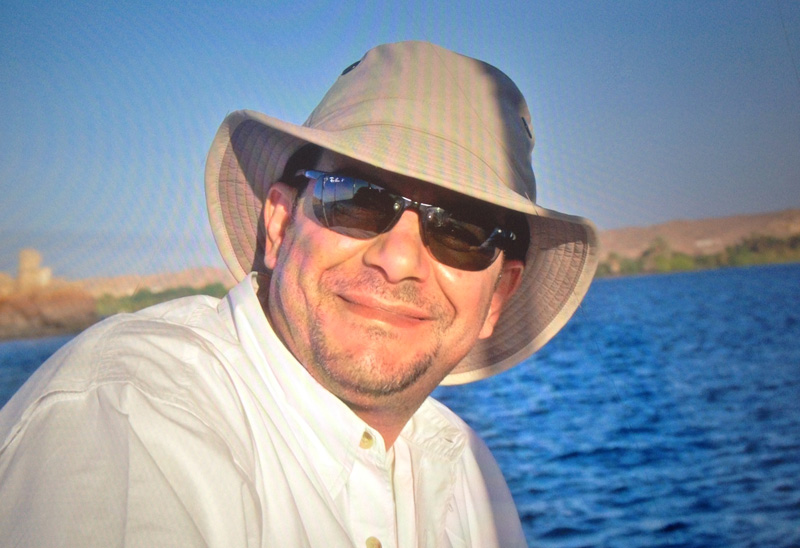 Yasser was in born in Cairo in 1971. In 1996 Yasser graduated from the Faculty of Tourism and Hotels and has enjoyed working as a tour guide since 1998. He has had the pleasure of leading many American and British tour groups, specializing in Biblical, Academic, and Pilgrimage groups. During the past 15 years, Yasser has also assisted major production companies while they shoot films about Egypt. In his spare time, he enjoys travelling, engaging in desert safaris, camping, reading, and spending time with his wife, daughter, and 2 sons. Yasser’s favorite site in Egypt is Luxor. He describes it as an open air museum involving 7,000 years of fascinating history. 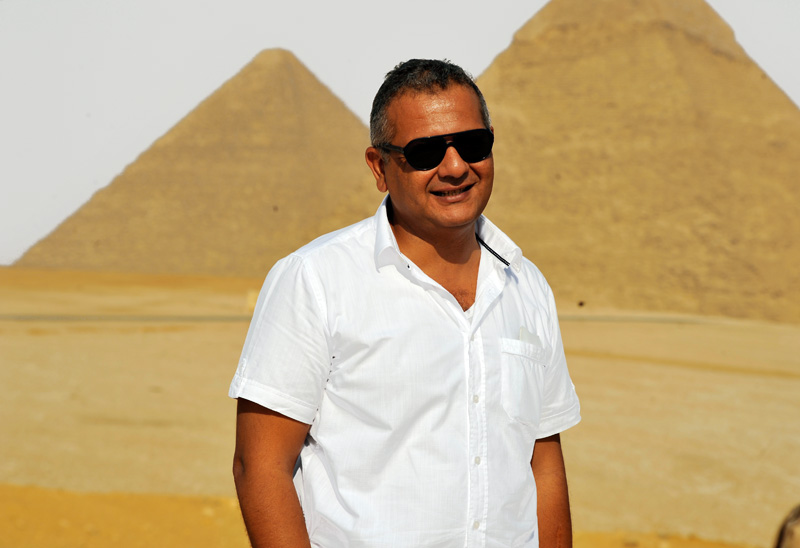 Osama Tawfik was born and raised up in Egypt, Land of the Pharaohs. He points out that it is the Land of the Bible, as well, with over 7000 years of history. Osama studied Egyptology and tourist guidance for 4 years after high school and has almost 20 years of experience in the tourism field. He is an English speaking tour guide, who works mostly with US citizens. Osama’s favorite site in Egypt is the Egyptian museum. He describes it as having the richest Egyptian collection ever from all different time periods. According to Osama, “there are some interesting and biblical related pieces as well ...come and see!” 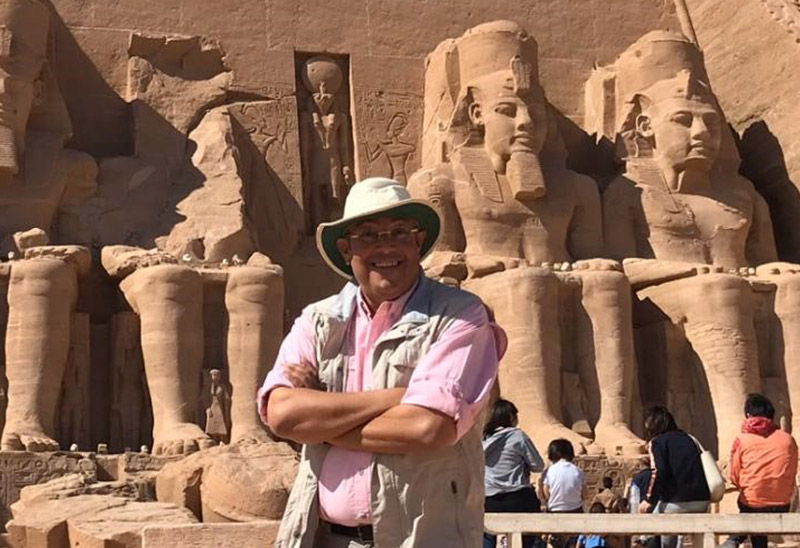 Essam Zeid was born and raised in Egypt in 1970. Studied business administration and a post graduate diploma for guidance. I have been enjoying working with tourists from all over the world. Start to be specials in pilgrim's American tour for the last 15+ years... My passion is to link the history to the land and both to the Old Testament and the holy book. I live between Egypt and Chicago for the last five years and enjoy both of them equally. My favorite site in Egypt is every part of it, I still amazed with the pyramids every time I go there. But what I like the most is the magical city of Luxor... Where the history is all around. My spare time is where I spend it travels all over the world and I very much love to read and walk by the sea. Father of three gorgeous kids and live just for them. 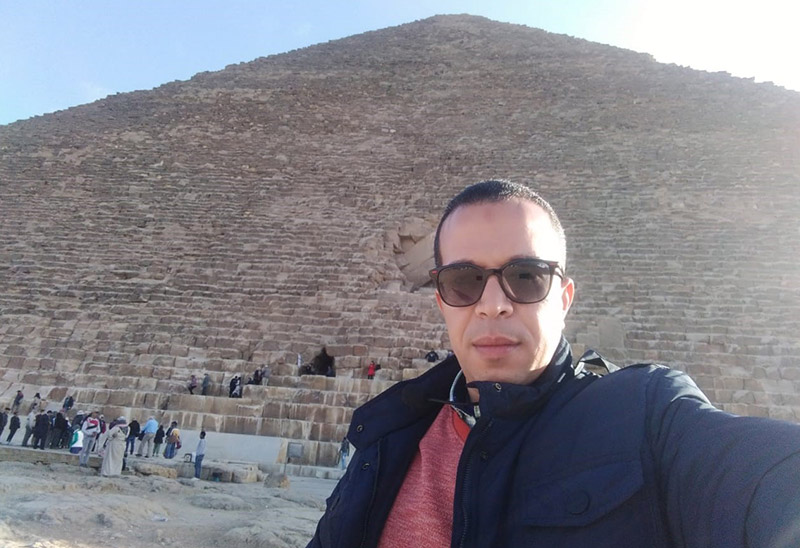 Moustafa was in born in Minia in 1983. In 2005 Moustafa graduated from the Faculty of Tourism and Hotels and had Master in Egyptology on 2015 and has enjoyed working as a tour guide since 2006. He has had the pleasure of leading many American and British tour groups, specializing in Biblical, Academic, and Pilgrimage groups. During the past 14 years, Moustafa in his spare time, he enjoys traveling, sports,reading, and spending time with his wife, 02 daughter, and 1son. Moustafa favorite site in Egypt is Luxor and Aswan . He describes it as an open air museum involving 7,000 years of fascinating history. 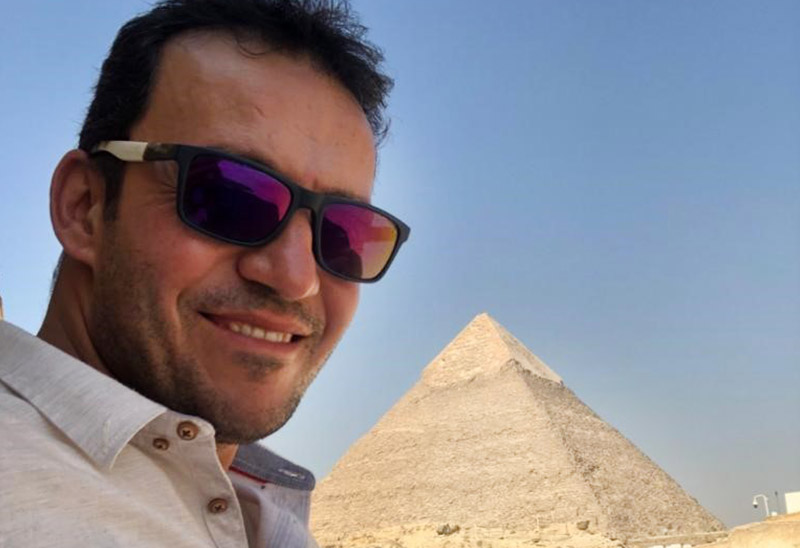 Mohamed was born in Cairo 1973 .he graduated from Cairo University, faculty of literature, history department. He have been working in tourism field since 1997 leading foreign groups and assisting tour operator then he upgraded his career to be tour guide. He enjoyed guiding American clients, British and an Australian group, the Giza Pyramids is his favorite site. He feels while explaining that he was there during the construction. Beside Mount Sinai. The land experienced the epic of the Israelites. Guiding groups is not just a job it is his life interest. 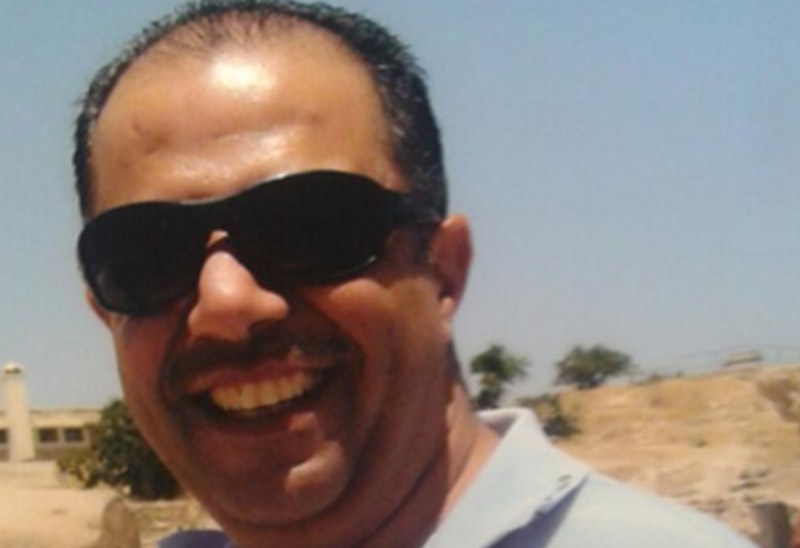 Emad graduated from the University of Jordan faculty of Archaeology and tourism with a bachelor’s degree in Archaeology, he has enjoyed working as a tour guide since 1998. Emad’s favorite site in Jordan is Mt. Nebo. He describes it as a meaningful and spiritual site that has an outstanding view. 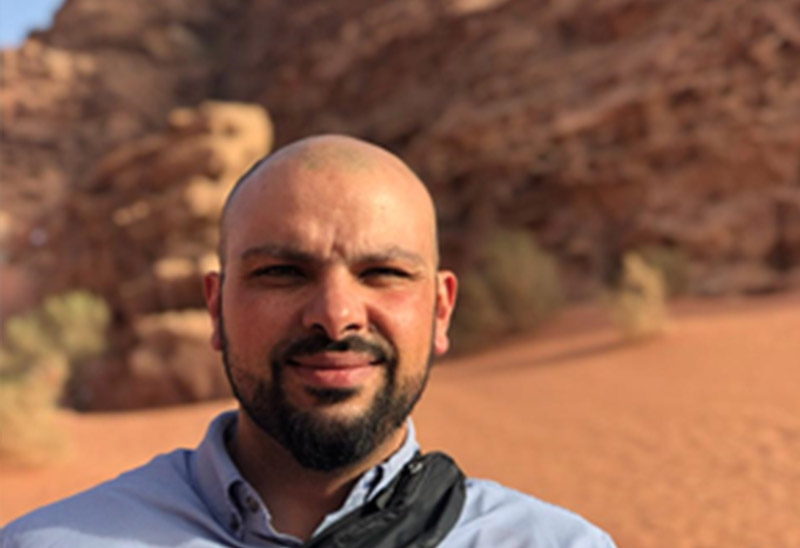 Omar was in born in Madaba in 1983. Omar graduated from the University of Jordan with a bachelor’s degree in Archaeology and Anthropology, he also has a Master’s degree in Economics of cultural heritage from the University of Catania in Italy. He officially started working as a tour guide since 2010. He has had the pleasure of leading many American, & British tour groups, specializing in Biblical, Academic, and Pilgrimage groups. In his spare time, he enjoys reading books and hiking. Omar’s favorite site in Jordan is Madaba, he describes it as a city that is rich in culture and of course because he was born, raised and lives there.